Special for is 10% Off use coupon code; discount 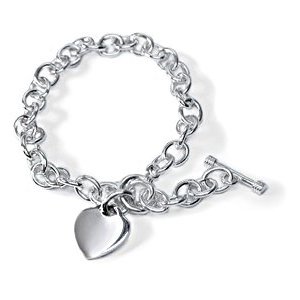 Silver has been known and used for thousands of years and it is considered as one of the three precious metals along with gold and platinum. Pure silver is very soft metal with its lustrous white color. Although it is harder than gold and much more plentiful, but still too soft in its natural state and required to be mixed with a harder metal for the use in jewelry manufacturing. It ranks second in ductility and malleability to gold. It is normally stable in pure air and water but tarnishes when exposed to ozone, hydrogen sulfide or sulfur.

Silver is the brightest reflector of any metal (except for liquid mercury) and can be polished to a high sheen that even platinum can't achieve. It has also the highest electrical and thermal conductivity of all metals, even higher than copper. Most silver is produced as a by-product of copper, gold, lead, and zinc mining. Commercial grade fine silver is at least 99.9% pure silver and purities greater than 99.999% are available. Mexico is the world's largest silver producer which contributed 15% of the annual production of the world. Canada, Peru, Australia and the United States are the other major countries, which are producing silver.

It has long been valued as a precious metal and used in currency, jewelry, ornaments, and utensils. Now-a-days, silver is also used in photographic film, electrical contacts, mirrors, dentistry and surgical implants.

Purity of silver is based on the other metals, which are available in the silver in the form of metal alloys. Unlike gold, but like platinum, silver purities are expressed as units of a 1,000 parts. On the basis of its purity, it can be described as below:

Due to the softness of pure / fine silver, it can not be used in its purest form for jewelry. Therefore, to give strength and durability to the pure silver, it is alloyed with other harder metals, usually copper. A mixture of 92.5% of pure silver and 7.5% of copper is known as Sterling Silver. Sterling Silver is one of the most familiar and used form of silver alloys. Purity - 925 points (92.5% pure silver)

Diamonds are graded on a letter scale from D to Z: D, E, or F diamonds have no color detectable to the unaided eye; grad G, H, I, or J are nearly colorless, but a trained gemologist can detect a slight yellow cast. J through Z colored diamonds have yellow or gray color visible to the unaided eye. Diamonds rated lower than I have color that is detectable even to the untrained eye. Those rated J to M have a trace of color, while any diamond with an N or higher carries a noticeable yellow tint

The charts above are clarity plots, which is a representation of the number and size of inclusions typically present in diamonds of a particular clarity grade. Look for a clarity plot on a diamond certificate, or grading report, to get a clear idea of the number and size of inclusions in a particular diamond. From this map, you can perfectly determine a diamond's clarity without even

Gemologists use grades of clarity to describe how many inclusions a diamond has. These grades range from flawless (FL) or internally flawless (IF) to included (I3), with the numbers indicating varying degrees of quality within a grade (1 being the best). Most commonly diamond sold are diamond that has no inclusions visible to the unaided eye, like VS1 and SI1-2. Diamonds of this clarity are much less expensive than flawless diamonds, and will not contain inclusions that would reduce from the splendor of the diamond

In order To get clearer understanding of how thick or wide is a piece of jewelry, you can use US coins for reference. For thicker items you can stack multiple coins to acquire the approximate thickness or the width of your selected jewelry.